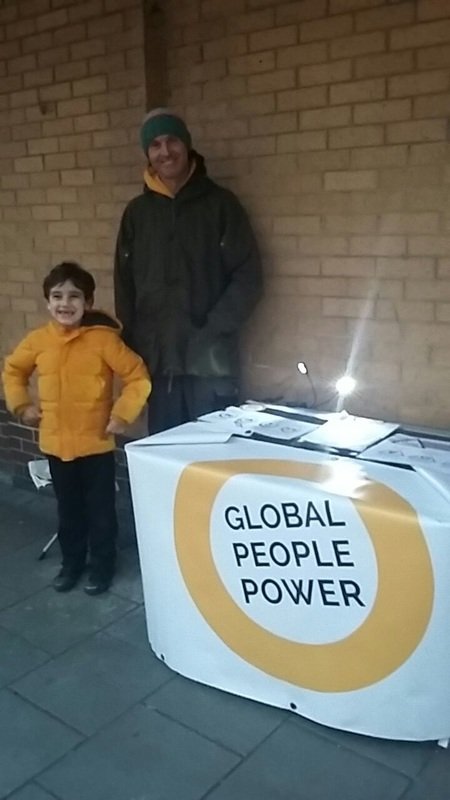 Yesterday I went out to recruit new Global People Power “Pioneers” by holding the campaign’s first ever street stall. I was pretty nervous setting it up feeling all eyes on me from stopping buses. I held it on a busy Brighton High Street as people made their way home from work or from picking the kids up from school.

In an hour and a half I had several wonderful, moving, enlightening conversations with people, all of whom gave me their contact details. They included two people from North Africa, a family from Chile, an NHS psychologist, an anti-GM crop activist and other passers-by. What hit me was that no one challenged my global prognosis and remedy. No one came from an established neo-liberal standpoint. But then I suppose there aren’t typically that many neo-liberal street stalls espousing the wonders of the present economic orthodoxy. Why would they need to? They think history is over and their cause justly won. Imagine someone shouting “This is the best of all possible worlds! David Cameron is great!” I was of course attracting people looking for something new!

To get people to stop and talk to me I nonchalantly read my newspaper and looked up to see who was peaking over. I offered the curious peaky ones a flyer stating that “it’s a political thing” so they didn’t think I was fundraising for a charity, which is what I do for the RSPB.

Alongside informing people what I was up to, I asked them ‘what was important to them, what are their needs, what drives them?’  I was going to ask people to film me and to post it on facebook but the traffic there was a bit noisy and I also thought that perhaps I should hone my message first.

The father of the family from Chile (who took this photo of me and their lovely talkative, colour coded, son) told me about how in the 1970’s, the CIA backed the military dictator Pinochet who ousted the democratically elected socialist leader Allende. Pinoche went on to murder thousands of his own people. The father of the family told me how Allende wasn’t communist but was a socialist and a constitutionalist. He said that his country needs to change again due to huge and growing inequality there.

I met a young woman with a North African accent who surprised me by saying that “the system is fucked up and needs to change.” I said that that is what we are doing, “systems change, and systemically!”

The NHS Cognitive Behavioural Therapist told me how private finance initiatives (PFI’s) were bankrupting the NHS and how underfunding was driving it into the hands of private investors targeting the most profitable NHS departments. We discussed how TTIP, the Transatlantic Trade and Investment Partnership would mean that nations could not legally protect their health service from being bought up by multinational corporations.

The anti-GM man asked if I was in favour of GM. I said that if the science was in favour then I would be but I would certainly follow the “precautionary principle” to be absolutely certain. He told me how scientist were hired by multi-national agro-business corporations to prove that GM was a good thing. This was so companies such as Monsanto which he called “despicable” could own and control all food production sources and “patents to life.”

The man from Algeria said that since being liberated from France fifty years ago the same power structures are still in place there. He said that the Arab Spring was initially a good thing but that western armed militias such as Isis, funded by selling oil, have destabilised the whole region opening it up to more western intervention and probable invasion.
My honed message was to tell people how they can take part to create global policies to tackle global problems, policies which benefit humanity and the planet, not just the profits of multi-national corporations. I told people how we want to unite progressive movements around the world to form a coherent global front for justice, just as coherent as the neo-liberal “global establishment.”

All in all it was a hugely positive experience. There was evidence of incredible unsolicited agreement as to the cause of world problems and to sensible systemic solutions. I am off to do it again on one of my days off next week.